Skilfully detailed, the fine sketch drawing renders revelry in remembrance of the triumphant and celebrated sixteenth century galleon ‘Ark Royal’ which was constructed for Walter Raleigh and subsequently chosen by Lord Howard admiral of the English fleet against the Spanish Armada. Sailing with another Royal Navy vessel alongside her, in choppy waters with the hilly coast of the English Channel in the background, several English naval officers are poised for combat on her gun decks, with arquebus style muskets prostrate towards an unseen seafaring enemy. Both vessels are sporting the flag of England, and, in the most clever fashion, the artist reveals the identity of the ‘Ark Royal’ by inscribing “DESRNAREPOS” on two of her flags, representing the famous motto associated with her, “Desir Na Repos.” Meaning “Zeal Does Not Rest” this has remained the motto for all subsequent vessels named after her, with a 500 year history, some claiming that she is the most famous warship in the world.

The galleon originally named ‘Ark Raleigh’ was built at Deptford for Sir Walter Raleigh in 1587. The following year she was commissioned into the Royal Navy and renamed ‘Ark Royal’. Her first action came in 1588 during the attack of the Spanish Armada. As one of the largest vessels in the English fleet, she was the flagship of Lord High Admiral Howard. Following the initial defeat of the Armada, she led the chase of the fleeing ships into the North Sea and beyond the Firth of Forth. She was also used as Howard’s flagship during the 1596 raid on Cádiz, which resulted in the destruction of much of the Spanish fleet at harbour. Ark Royal was again the flagship during 1599 when a Spanish invasion again threatened. Her fame led to a number of later warships of the Royal Navy being named Ark Royal in her honour, including a number of flagships of the fleet.

The vessel was 100 feet long on the keel, had a beam of 37 feet and carried 44 guns. She had two gun decks, a double forecastle, a quarter deck and a poop deck right aft. She was an effective warship, but tended to roll heavily, to the discomfort of the embarked soldiers unused to the motion. 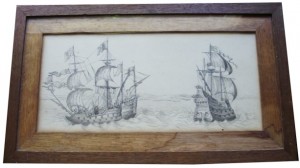